he 12 teams qualified for the Tokyo 2020 Olympic Games Women’s Basketball Tournament in February last year through the four FIBA Women’s Olympic Qualifying Tournaments, which had 16 teams take part in Belgium, France and Serbia.

Click here for the full schedule of the Tokyo 2020 Women’s Olympic Basketball Tournament. The times of the Group Phase games will be announced at a later date. 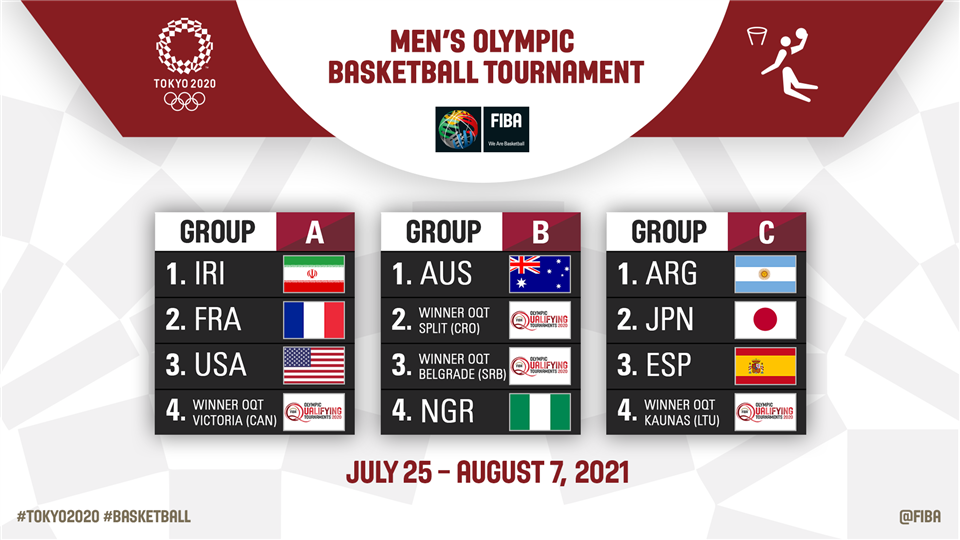 Eight teams at the FIBA Basketball World Cup 2019 qualified for the Tokyo 2020 Olympic Games Men’s Basketball Tournament. Teams designated as OQT winner will be those qualifying through the FIBA Olympic Qualifying Tournaments in Victoria, Canada; Split, Croatia; Kaunas, Lithuania; and Belgrade Serbia from June 29 to July 4, 2021. These four FIBA Olympic Qualifying Tournaments were postponed last year due to the coronavirus pandemic. The winners of each OQT have been drawn into the Olympic Basketball Tournament’s four vacant positions.

Click here for the full schedule of the Tokyo 2020 Men’s Olympic Basketball Tournament. The order and times of the Group Phase games will be announced at a later date.

FIBA Secretary General, Andreas Zagklis, said: “We are looking forward to enjoying the world’s best basketball players performing this coming July in the capital of Japan. FIBA is confident for the smooth delivery of the Olympic Basketball Tournaments based on the close partnership with the IOC and the TOCOG as well as on its own, proven operational capacity during the last seven months. Last October and November FIBA and its Regional Offices managed to have no less than 114 men’s and women’s national teams travel internationally and play safely in bio-secure hubs, performing approximately 12,000 PCR tests.”

In both tournaments, a new competition system has been put in place for Tokyo. The Group Phase will consist of three groups of four teams each. The teams placed first and second in each group, and the two best third-placed teams in the Group Phase qualify for the Final Phase.

These changes were made to the competition system to bring additional interest to every game of the Group Phase and reduce player workload. To capture Olympic gold, a team has to play six games, instead of eight games, as was the case at past Olympic tournaments. For more information, click here.

Dwayne Johnson A.K.A ‘The Rock’ Drops Hints At Running For US Presidency