Online access would be suspended in at least 14 of 22 districts in Haryana state near New Delhi, until 5 p.m. Monday, according to the Department of Information and Public Relations of Haryana on Sunday. That order was first imposed Tuesday in three Haryana districts for 24 hours, but has been extended every day since.
A 48-hour internet shutdown was also imposed in three other areas around Delhi’s borders late on Friday, with India’s Ministry of Home Affairs saying the move was “in the interest of maintaining public safety and averting public emergency.”
According to officials, those blackouts should have lifted on Sunday night, but Paramjeet Singh Katyal, a spokesperson for Samyukta Kisan Morcha, an umbrella body representing protesting farmers, said the internet was still not working as of Monday. 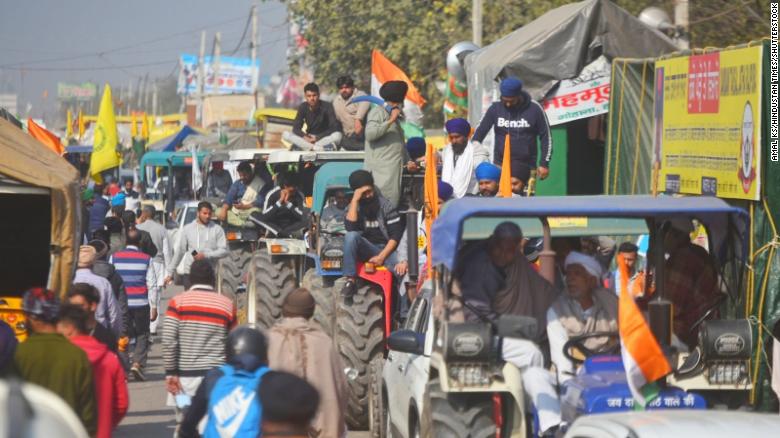 Demonstrators gather at the Singhu border as farmers protest against new farm laws, on January 30, 2021 in New Delhi, India.
The internet restrictions came after violent scenes last week as demonstrations continue against three agricultural laws passed in September. Since late November, hundreds of thousands of protesters have gathered on the outskirts of New Delhi to demonstrate against changes they say they weren’t consulted on and which will hurt their livelihoods.
On Tuesday last week — a national holiday known as Republic Day that marks the anniversary of the enactment of the country’s constitution — thousands of protesters stormed New Delhi’s historic Red Fort as police used tear gas and batons against the demonstrators.
Dozens of officers were injured and one protester died when a tractor overturned during the protests near Delhi police headquarters, police said Wednesday. More than 100 protesters are still missing, Samyukta Kisan Morcha said Sunday.
An internet shutdown was also imposed in areas around New Delhi from midday to midnight on Tuesday.
Darshan Pal, a leader from Samyukta Kisan Morcha, condemned the internet shutdowns, calling the moves “undemocratic.”
“The government does not want the real facts to reach protesting farmers, nor their peaceful conduct to reach the world,” Pal said in a statement Sunday. “It wants to spread its false spin around farmers. It is also fearful of the coordinated work of the farmers’ unions across different protest sites and is trying to cut off communication means between them.”
Nevertheless, farmers are still joining the protests, Samyukta Kisan Morcha’s Katyal said Monday. “Typically these village groups work against each other but this time they have all united for the collective fight,” Katyal said.
Additional deputy commissioner of police in Delhi, Jeetendra Meena, said police had deployed more forces at the border in case any protests break out Monday.

Although India is the world’s most populous democracy, it also topped the world in terms of internet shutdowns in 2019, according to Access Now, an advocacy group which tracks internet freedom.
In 2019, the government imposed a months-long internet blackout in Indian-controlled Kashmir after India rewrote the constitution to remove Kashmir’s protected autonomy.
That same year, authorities shut down internet in other areas, including in parts of New Delhi, amid widespread protests against a controversial citizenship law considered by many to be discriminatory against Muslims.
The approach is controversial. In India, some individual shutdowns have been challenged in the courts, and there is an ongoing effort to change the country’s laws to make such blackouts more difficult to impose.
The shutdowns also come against the backdrop of rising concerns about press freedom in India. 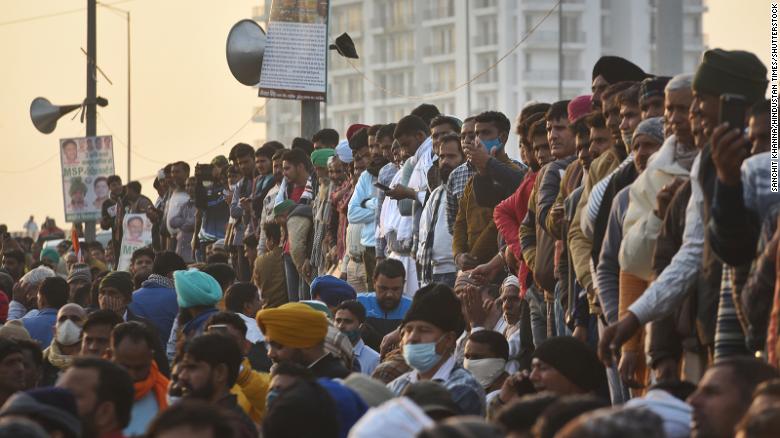 Demonstrators gather at Ghazipur, on January 30, 2021 in New Delhi, India.
On Saturday, Mandeep Punia, a freelance journalist covering the protests, was arrested on the border between Delhi and Haryana, Punia’s lawyer Akram Khan told CNN Monday.
Punia has been remanded to judicial custody for 14 days from Sunday, accused of obstructing a public servant from discharging his duty and voluntarily causing hurt and assault or criminal force to deter a public servant from duty.
“(The) accused was merely carrying out his journalistic duties and another journalist was detained along with him but was released around midnight,” according to an application for Punia’s bail.
But Delhi police’s Meena said Punia was not carrying an ID card when he was caught in a scuffle between villagers and protesters. Meena said Punia incited the farmers and pushed police.
Devdutta Mukhopadhyay of Internet Freedom Foundation, a non-governmental organization, said the government was using “extremely draconian” measures and the internet suspension was disproportionate. Online access remains restricted in the majority of Haryana, which impacts not just protesters but citizens who have been forced to work and study from home due to the coronavirus pandemic.
She said there had been reports of mob violence against protesters, and added that it was important for farmers to put forward their side of the story as unbalanced reporting could foster a negative opinion among the public.
The shutdown could set a “very dangerous precedent,” she added.
“It’s not like you are taking down specific posts or pages that you think are false or inflammatory, this is you shutting down an entire medium of communication.”
Last week, India’s Congress Party, along with 15 other Opposition parties, wrote a joint letter, condemning the way the protesters had been handled by Prime Minister Narendra Modi’s government, calling their response “arrogant, adamant and undemocratic.”

Why farmers are protesting

The massive farmer protests have been a significant challenge to Modi as months of demonstrations and sit-ins across the country against his key agricultural policy have grown into a stalemate marked by deadlocked talks between farmers and his administration. 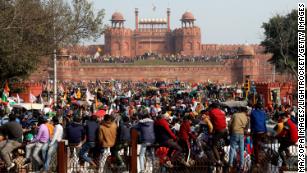 Indian farmers storm New Delhi’s Red Fort during tractor protest
For decades, the Indian government offered guaranteed prices to farmers for certain crops, providing long-term certainty that, in theory, allowed them to make investments for the next crop cycle. The new rules allow farmers to sell their goods to anyone for any price — giving them more freedom to do things such as sell directly to buyers and sell to other states.
But farmers argue that the new rules will leave them worse off by making it easier for corporations to exploit agricultural workers, and help big companies drive down prices. While farmers could sell crops at elevated prices if the demand is there, conversely, they could struggle to meet the minimum price in years when there is too much supply in the market.
The laws have been so contentious because agriculture is the primary source of livelihood for about 58% of India’s 1.3 billion population, and farmers have been arguing for years to get the minimum guaranteed prices increased. They are the biggest voter block in the country — making farming a central political issue.
The government has held rounds of talks with leaders of more than 30 farmers’ unions that are opposed to the laws — but the talks have gone nowhere.
Last month, India’s Supreme Court issued an order putting the three contentious farm laws on hold and ordered the formation of a four-member mediation committee to help the parties negotiate. But farmers’ leaders have rejected any court-appointed mediation committee.
According to Samyukta Kisan Morcha, at least 147 farmers have died during the course of the months-long protests from a range of causes, including suicide, road accidents and exposure to cold weather. Authorities have not given an official figure on protester deaths.