.Twenty federal criminal defendants related to last week’s deadly pro-Trump riot at the US Capitol have been rounded up across the country since the insurrection, with the allegations showing the danger of the mob.

Some of the defendants are accused of bringing weapons and bombs to Capitol Hill, indicative of the extremism of parts of the crowd. Others were photographed ransacking the building, smiling while posing with congressional items such as House Speaker Nancy Pelosi’s lectern or at her staffer’s desk, or publicly bragged about the crowd’s violent and destructive joyride.

Weapons and bombs brought to DC

The most unsettling of the allegations so far appear to be those against Lonnie Coffman, an Alabama man charged after authorities found 11 homemade bombs, an assault rifle and a handgun in his truck parked two blocks from the Capitol. The truck had sat there all morning during the pro-Trump rally, and Coffman was arrested as he tried to return to the vehicle after dusk. 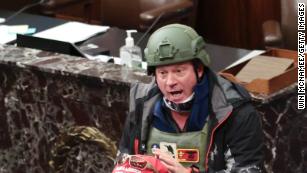 Larry Rendell Brock
In another startling complaint, Cleveland Grover Meredith Jr. is accused of writing in text messages that he wanted to shoot House Speaker Nancy Pelosi, and that he had brought hundreds of rounds of ammunition and three guns to Washington, DC, having driven from Colorado, according to court records. 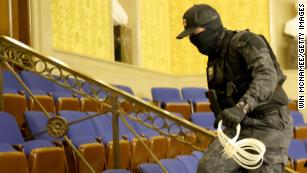 Eric Gavelek Munchel
On Sunday night, authorities arrested two more men, Eric Munchel of Tennessee and Larry Rendell Brock of Texas. Both had drawn attention online because of photos showing them wearing body armor inside the Capitol building and carrying plastic ties that could restrain a person.
Munchel, who was arrested Sunday, had been first stopped by law enforcement on January 6 because he was carrying a Taser for self-protection while attending the rally, according to his newly released charging documents.
The FBI followed images of Munchel leaving the hotel without a face mask and carrying a drink just before President Donald Trump began to speak that day to his supporters.
Munchel is charged with entering restricted grounds of the Capitol and violent entry or disorderly conduct. He has not yet appeared in federal court in DC, where he is charged.

As new details emerge, it has become obvious that lawmakers faced more imminent danger than was understood as the attack unfolded on live television.
“What was going through my head was frankly terror,” Democratic Rep. Susan Wild said on CNN’s New Day last week after having to take shelter on the floor of the House. 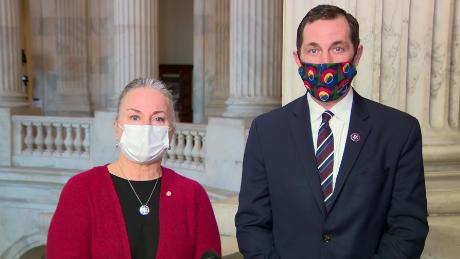 “We were trapped … I had a pen in my pocket that I could use as a weapon and was looking for other weapons as well” as the vicious crowd breached the building, Democratic Rep. Jason Crow, who served as an Army Ranger in Iraq and Afghanistan, also said in the CNN “New Day” interview.

The top federal prosecutor in Washington, DC, Michael Sherwin, said he expected hundreds of people could be charged in the aftermath of the attack, and investigations may take months to understand it fully.
“I would not be surprised if we find loose affiliations of groups that were organized and had plans in place,” Sherwin said Sunday. “We saw in some of these individuals we identified — they look paramilitary almost, right? You’ve got the uniform, you’ve got communication, you have all the paraphernalia. Those show indications of affiliation and a command-and-control. So I believe we are going to find those hallmarks.”
Viral rioters also charged
One of the federal defendants so far, Jacob Chansley — who wore into the Capitol no shirt, a bearskin headdress, face paint and horns and was captured in many images of the crowd — has already told the FBI he came to Washington “as a part of a group effort, with other ‘patriots’ from Arizona, at the request of the President that all ‘patriots’ come to D.C. on January 6, 2021,” according to his court documents. 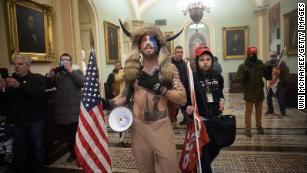 Jacob Anthony Chansley
Others charged with taking part in the melee, such as Proud Boys Hawaii founder Nick Ochs and Joshua Pruitt, who is identified in a November video reciting an oath to the Proud Boys, appeared to have allied with fringe groups like the Proud Boys and QAnon that have followed Trump.
Ochs, who was charged with one count of unlawful entry into restricted buildings or grounds, was released from jail Monday ahead of his next court date.
In court in Honolulu on Monday, Magistrate Judge Wes Reber Porter found that Ochs had no prior convictions and granted a $5,000 bond. Ochs’ attorney, Myles Breiner, told CNN that Ochs was set free on a “signature bond,” meaning he did not have to put up any money for release.
Ochs was arrested last Thursday at the Daniel K. Inouye International Airport in Honolulu as he was returning from Washington. Investigators cited his interview with CNN and a tweeted photo captioned “Hello from the Capital lol” in their charging document.
The magistrate judge ordered Ochs to remain on the Hawaiian island of Oahu, where he lives, prior to his next court appearance on January 27 before a magistrate in Washington.
Several others who were not charged with crimes have lost their jobs for attending the rally at which Trump spoke. One man, Derrick Evans, resigned from his recently won seat in the West Virginia House of Delegates after federal prosecutors charged him. He said he took responsibility for his actions — which included allegedly livestreaming his entry into the Capitol building and shouting “We’re in! We’re in, baby!” A man later approached him and shakes his hand, saying, “Welcome to Congress.”

Several of the federal defendants are set to appear in court for initial proceedings and detention hearings in the coming days, with more arrests likely to come that may reveal how armed and prepared others in the crowd were. 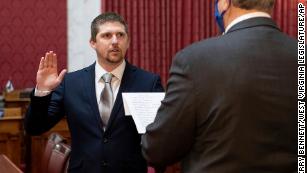 Former West Virginia House of Delegates member Derrick Evans
None of the 20 federal defendants have been formally indicted by a grand jury yet, a process that is likely to provide more details publicly about the seriousness of the breach.
The far-ranging criminal investigation is still at its earliest stages. Sherwin said on Sunday hundreds of people could be charged, while the FBI has released more than 40 images of people inside or around the Capitol it seeks help to identify.
That includes a man suspected of placing pipe bombs outside the Republican and Democratic party headquarters buildings near the Capitol. The FBI is offering a reward of up to $50,000 to help with finding the person.
Tags:Capitol HillDonald TrumpNancy Pelosi
Share on FacebookShare on Twitter
gnbnews1 week ago

Confidence in Chinese vaccines has taken a hit. But As Coronavirus Cases Grow, Some Countries Are Still Pushing Ahead

FUNAAB Clears Air On Jan 18 Resumption, Even In The Wake Of Rising COVID-19 Cases

United Takes On Burnley, Might Go Top Of The EPL Table