Tesla is betting big on bitcoin, saying it may soon accept the digital currency as payment for its cars. And the most valuable car company on the stock market said it is holding some of its cash in bitcoin rather than traditional currency.

In its annual filing with the Securities and Exchange Commission, Tesla said that it expects “to begin accepting bitcoin as a form of payment for our products in the near future … initially on a limited basis, which we may or may not liquidate upon receipt.”
In addition, Tesla said it has invested $1.5 billion in bitcoin so far as part of a decision to “invest a portion of [the company’s] cash in certain specified alternative reserve assets.” Tesla lists $19 billion in cash and cash equivalents on its balance sheet as of December 31.
The announcement gives the cryptocurrency a fresh dose of legitimacy: The price of bitcoin was up 12% in morning trading on the news. Shares of Tesla were up 2% in early trading.
There has been a growing appetite by mainstream investors to invest in bitcoin, although some on Wall Street have recently argued that its value is an overpriced bubble.
Although there are some merchants who accept bitcoin as a form of payment, many require those who want to use bitcoin for purchases to first convert them to dollars or some other local currency. The decision by a major company such as Tesla to accept bitcoin directly for a purchase would be an important milestone for the upstart currency.
One bitcoin was worth nearly $43,700 in trading Monday, or slightly more than the starting price of Tesla’s least expensive car, the Model 3. The base version of the Model 3 can be purchased for $37,690, including destination and documentation fees. The more expensive Tesla models, the Model S sedan and Model X SUV, can end up with a price well above $100,000 depending on various options.
Tesla CEO Elon Musk has lately been signaling interest in bitcoin and other cryptocurrencies. In a Dec. 20 tweet Musk said that “Bitcoin is almost as bs as fiat money,” suggesting his belief that it is perhaps less “bs” than traditional government-backed currencies.
In a recent interview on social app Clubhouse, Musk said the cryptocurrency is on the “verge of getting broad acceptance by conventional finance people” and expressed regret over not buying it eight years ago when it was trading at a small fraction of its current value. 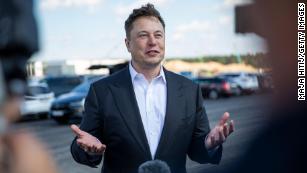 Elon Musk tweeted. Dogecoin surged more than 50%
“I do at this point think bitcoin is a good thing,” he said. “I’m late to the party, but I am a supporter of bitcoin.”
Musk has history in the alternative payments space, as he was one of the co-founders of PayPal. Some of the money he made from the $1.5 billion sale of PayPal to eBay in 2002 helped him buy a controlling stake in Tesla in 2004. At that time, Tesla was a privately held startup company years from producing its first car.
The price of bitcoin has been on quite a run lately, though not quite as good as Tesla shares themselves. Bitcoin increased in value by 303% in 2020, compared to a 743% rise in Tesla stock.
But the company’s filing acknowledged there are risks to the automaker holding bitcoin, which has seen its value fluctuate far more wildly than traditional currencies or other short-term investments.
“Their long-term adoption by investors, consumers and businesses is unpredictable,” said Tesla’s filing. In addition it acknowledged the risk of “malicious attacks and technological obsolescence” for its bitcoin holdings. And it said that it would have to take a charge against earnings if the value falls below the price at which Tesla buys bitcoin, even if has yet to sell those holdings. But Tesla is not allowed report a gain from any increased value in bitcoin until it sells those holdings.
Tesla’s freedom to accept payments in bitcoin is an option that its competitors may not have available. Other automakers sell vehicles directly to dealerships, which are independent businesses that then make sales to consumers. But Tesla does not have any dealerships, only company-owned stores.
Tags:Tesla
Share on FacebookShare on Twitter
gnbnews3 weeks ago