Stefanos Tsitsipas became only the second player to recover from two sets down to beat Rafael Nadal at a Grand Slam on Wednesday, as he recorded a 3-6, 2-6, 7-6(4), 6-4, 7-5 victory at the Australian Open.

The Greek was handed a route back into the match as Nadal committed three uncharacteristic errors at the start of the third-set tie-break, and he took full advantage of his opportunity. Tsitsipas won 84 per cent of first-serve points (36/43) and struck 27 winners in the final two sets to clinch his first victory against the World No. 2 on hard courts (1-4).

“I have no words to describe what has just happened on the court, my tennis speaks for itself,” said Tsitsipas, in an on-court interview. “It’s an unbelievable feeling to fight at such a high level and leave it out on the court. I started very nervously. I don’t know what happened after the third set. I flew like a bird and everything worked for me.”

Nadal’s loss guarantees that Novak Djokovic will remain as World No. 1 through at least 8 March, when he will overtake Roger Federer to set a new record of 311 total weeks at No. 1 in the FedEx ATP Rankings.

“I focused on staying calm and holding my nerves today. I have failed to do so in some of my matches [in the past],” said Tsitsipas. “I stayed calm in the tight moments and I kept everything to myself. I am really happy with the attitude that I showed on the court.”

Tsitsipas gains revenge for his straight-sets loss to Nadal at this event in the 2019 semi-finals. The 2019 Nitto ATP Finals champion is through to his third Grand Slam semi-final, having also reached the final four at Roland Garros last year. 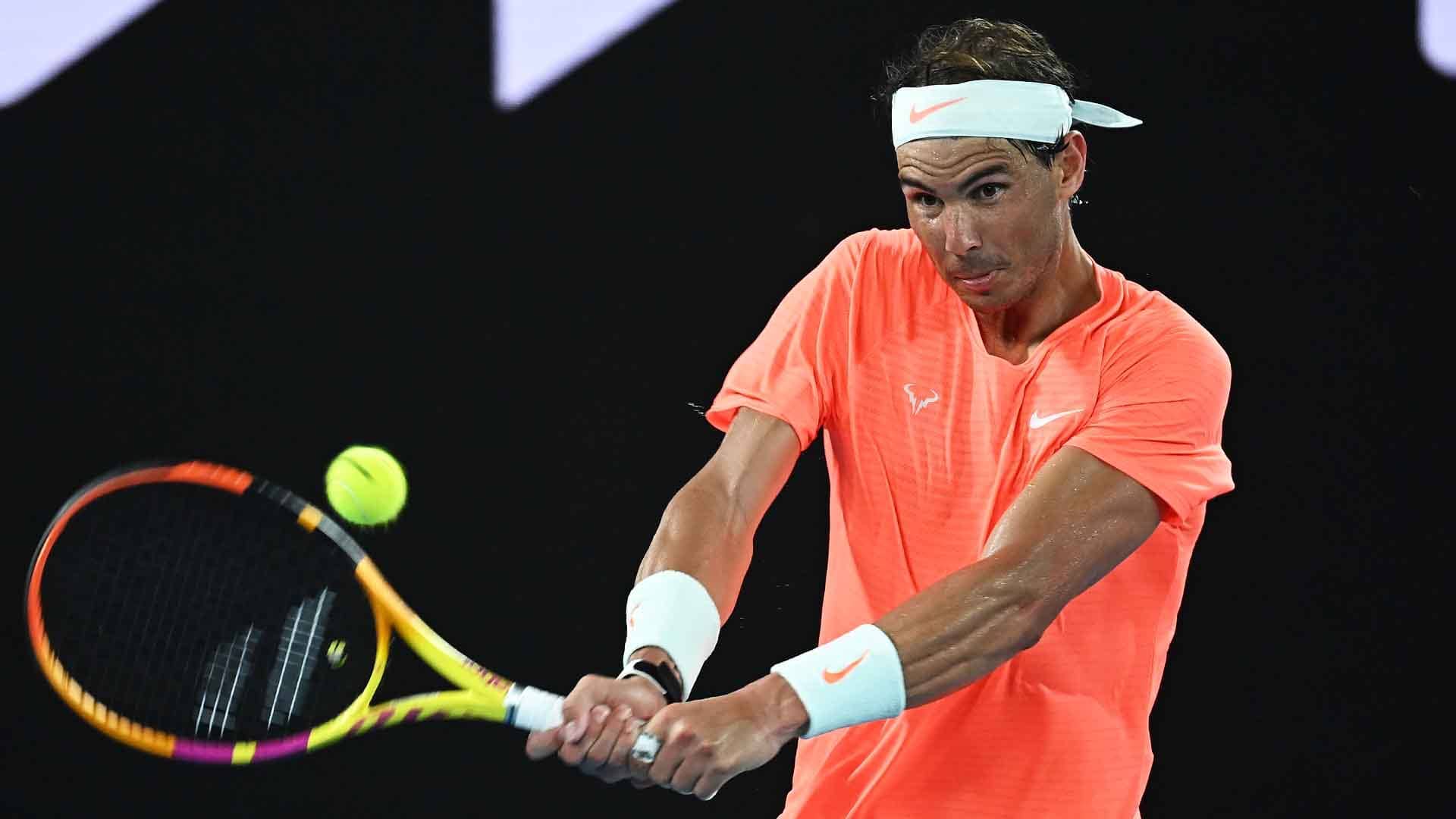 Nadal entered the third-set tie-break on a 35-set winning streak at Grand Slam events, but Tsitsipas halted that run with three consecutive sets to record his second win in eight ATP Head2Head meetings with the Spaniard.

Tsitsipas has survived two five-set battles en route to the semi-finals in Melbourne. The 24 year-old also needed a deciding set to overcome home favourite Thanasi Kokkinakis in the second round.

Tsitsipas will meet red-hot Russian Daniil Medvedev for a place in the championship match. Medvedev extended his winning streak to 19 matches on Wednesday, when he defeated ATP Cup teammate Andrey Rublev 7-5, 6-3, 6-2. Medvedev owns a 5-1 ATP Head2Head advantage against Tsitsipas, but it was the Greek who won the pair’s most recent encounter en route to the 2019 Nitto ATP Finals crown.

“[Medvedev] plays very well and has been very consistent, with lots of consecutive wins,” said Tsitsipas. “I need to recover and have a good ice bath. I am looking forward to the match and each match I play here is an opportunity to play my best tennis. It will be amazing to see the crowds again.”

From 0/30 down on serve at 3-3, Nadal raised his game to clinch the first set. The five-time year-end World No. 1 served his way out of danger and opened the court with multiple aggressive cross-court backhands to clinch the only break of the set.

Nadal carried his momentum into the second set, and his backhand caused his rival further problems in the opening game. The 2009 champion needed just one opportunity to break serve, as he pushed Tsitsipas into his backhand corner and changed his forehand direction to rip a winner down the line. Nadal struck winners and forced Tsitsipas into uncomfortable positions with his forehand to earn a double break at 3-1 and he soon clinched a two-set lead with a comfortable service hold.

In a third set dominated by serve, only four points were won on return. Nadal, who claimed five love service holds en route to the tie-break, committed three costly errors in the tie-break to gift Tsitsipas a route back into the match. The second seed missed two overhead attempts and fired a mid-court forehand into the net, before Tsitsipas played with aggression from the baseline to force a Nadal backhand error and a fourth set.

After ending the World No. 2’s 35-set winning streak at Grand Slam events, Tsitsipas earned his first three break points of the match in the opening stages of the fourth set. Nadal hit his targets on serve and trusted his overhead abilities to erase those chances and stay ahead in the score. Tsitsipas kept applying pressure, as he increased his forehand aggression and defended with skill to earn his first service break. Nadal committed back-to-back forehand errors to drop serve at 4-4 and Tsitsipas clinched the fourth set with a quick service hold.

In a tight deciding set, Tsitsipas held serve comfortably and rushed Nadal into four groundstroke errors at 5-5 to serve for the match. The fifth seed struggled to close the match, as Nadal fought from behind the baseline to extend rallies and extract errors. But Tsitsipas converted his third match point with a backhand winner down the line.

Nadal was aiming to capture a record 21st Grand Slam title this week. The World No. 2, who owns a 69-15 record at Melbourne Park, has fallen in the Australian Open quarter-finals in three of his past four visits to the tournament (2018, ’20-’21).